This article is about alt milks – alternatives to cow’s milk, such as nut milk, coconut milk, and oat milk. We taste and review some popular brands.

Almond milk is now pretty widely available. The sweet creamy flavour of almonds lends them to blitzing into ‘milk’. It’s suitable for vegans, and almonds are rich in nutrients. However the nutritional content of most commercially available almond milks isn’t great, simply because these ‘milks’ are mostly water. There is really very little almond in there, so they are lower in protein than cow’s milk and also low in fiber, most of the nutritional benefits coming from added supplements. This is also true of other nut ‘milks’ like cashew and hazelnut. Still, hazelnut milk does taste very good in coffee or hot chocolate. If you are lactose intolerant or looking to avoid dairy for some reason these are some of the best tasting milks out there. They are also reasonably easy to make, seeing as you just need to blend nuts and water. Apparently cashew milk is easier to make than almond milk. You just need to soak the nuts, then blend them with twice as much water. This is by far the best way to consume cashew milk, because the kind of places that make cashew milk are also the kinds of places that will charge you £6.00 for 250ml. It frequently shows up in juice cleanses for some reason.

Available from Real Foods, Ocado or Waitrose around £1.69  per 1l Rebel milk Waitrose, Tesco, or on their website £2.50

Coconut milk is something I would use to cook with, but increasingly it’s becoming popular as a dairy alternative. Brands like Rebel Kitchen are producing coconut milk in a weird and wonderful variety of flavours including matcha (green tea) and chocolate orange. If you’re looking for something to pour on your cereal, brands like Alpro do sell coconut milk, although it might be better to save it for baking. It’s vegan and (unlike some nut milks) contains no added sugar.

Oat milk is…I dunno…also fine. Like nut milks it’s low in fat and sugar and relatively high in calcium and minerals. I guess it may be good if you’re allergic to nuts, but less great if you’re gluten-free, as most commercially produced oat milks will contain some gluten. It tastes a little powdery but doesn’t split when heated. Oatly does chocolate as well as a foamable version for baristas. Nut, soy and coconut milks should foam ok anyway.

There are lots of alternatives to dairy which is great, seeing as up to 65% of adults have some issues with digesting dairy. All alt milks have different nutritional benefits, but none of them will give you the kind of protein benefit you would get from cow’s milk so, especially if you are vegan or vegetarian, you need to ensure you are making that up in other areas of your diet.

Love your non-drinking guests at your party

3 reasons alcohol does not make a good gym partner 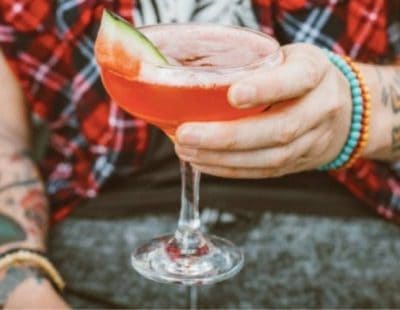