The Drinking Habit, Wellbeing and Popmaster

Our old friend Julian has another guest blog for us. Today, he explores how he reworked his drinking by understanding and changing old habits and rituals.

One of the ‘little’ things I enjoy is listening to the Popmaster competition on BBC Radio 2. The quiz is part of the Ken Bruce show, takes place each weekday morning at about 10.30 and lasts fifteen minutes or so. I usually stop what I am doing when this quiz is on, make myself a nice latte and relax. I enjoy listening to the contestants battle it out to win either a bluetooth speaker or a ‘one year out’ t-shirt. It has become quite a routine for me, and I firmly and assuredly recognise the sense of wellbeing that routine gives me.

My sense of wellbeing commences just prior to the quiz. It lasts for the duration, and for a short while afterwards until I return to whatever it was I was doing. I now know that this wellbeing is provided by a dose of happiness chemicals being stimulated in my brain by the whole experience, from my expectation through to the calm after-feeling and the momentary change of focus.

I thought about this little ritual of mine this morning, and tried to relate it to the some of the drinking routines I used to have.  For many years, I would stop off at the railway station buffet on the way home from work for a pint of beer. This was when I was much younger and the stopping off relaxed me and put me in the right frame of mind for the evening. Sometimes I would be with my brother who caught the same train as me, but often I would be on my own and I would stand at the bar and down my pint. I remember looking forward to that pint. It wasn’t necessarily from a position of particularly wanting to taste it, but it was the experience. I enjoyed the ambience of the station bar, the change from the day’s working drudge, and of course the beer did relax me – as a limited dose of alcohol does.

There was also the cider routine I adopted, whereby I would stop and have a glass of cider half way through mowing my father’s lawns on a Saturday morning. I would enjoy the smell of the new mown grass, the fit feeling from having exercised for an hour (Dad had a big garden), and the cold liquid refreshing me in the warm sunshine. I later developed a first glass of wine of the day routine (which of course never stopped there), making the excuse that the Sun was over the yardarm somewhere in the world. I would look forward to holding and caressing that glass and savouring the liquid inside as I took those first sips.

All these things I used to look forward to as part of an enjoyable routine that unbeknown to me triggered the release of happiness chemicals in me. However, the alcohol induced yet a further guaranteed dose, which is where complications start to arise. To put it simply and briefly, the brain recognises alcohol as being a ready trigger for these chemicals, enjoys the sensation the chemicals give, and so primarily associates the whole experience solely or mainly with the alcohol. To maintain the sensation the brain encourages you to have more alcohol and all of this reinforces what becomes a habit.

But let’s return to Popmaster and the big question. Is it the quiz I so enjoy or is it the little ritual I have created that includes the quiz?

Well, sometimes I have other things to do at the time when the quiz is on, or people call round to visit. It would be rude to be listening to the radio instead of giving them my full attention, and so I miss the quiz entirely. Just once I made the effort to listen to the quiz later in the day on the BBC iPlayer and, surprisingly, it didn’t do anything for me. Separated from the routine of the quiz happening at a certain time outside of my control and the accompanying latte, it was simply a quiz. I have never bothered to listen on iPlayer again.

This morning I also missed the quiz, hence my musing. I thought about the fact I was missing it for a brief moment and then moved on. So, I don’t crave the quiz, I am not addicted to listening to it, it doesn’t hurt me or depress me to miss it, and I don’t get a ‘downer’ because I have had to forgo it. But it is nevertheless a routine I enjoy and will continue with when I have the chance. I realised that looking forward to the quiz helps me to work well beforehand as I can anticipate the break, and work well afterwards having had the break.

So how does this relate to my drinking routines of old?

I now realise that the drinking routines I mention above were also something I wanted to continue with. Certainly, the beer on the way home and the cider whilst mowing routines weren’t ones that resulted in my getting paralytic, but they did involve alcohol. How they came about I don’t recall, but there is no reason why they couldn’t have involved a cup of tea or coffee instead. For me somehow alcohol became involved and that became part of the routine. The routine became a habit (not that there is much if any difference between routine and habit). Then, because a drug called alcohol was involved, the habit spread.

I mistakenly associated having a cider during mowing the lawn and the calm feeling this induced with the cider only and not with the experience itself. Therefore, why not have a cider at other times to induce the same state of mind? And so on. Before long I was drinking cider at every opportunity that presented itself. This wouldn’t have happened had I been drinking tea instead, as tea does not induce the happiness chemicals in the way that alcohol does.

That is why alcohol is a powerful drug, and why it is so easy to lose control. Once you start to associate a pleasant experience that involves alcohol with the alcohol alone, it becomes addictive. It becomes a substance you start to rely on and crave. I remember getting to the stage where I couldn’t function properly unless I had a glass in my hand, simply because my mind had associated it with life being pleasant. I would never have recognised that fact at the time as I was blinkered to reality. It’s really only now that I can look back and analyse rationally what was going on and why I felt so dependent upon alcohol.

But as far as Popmaster goes, I certainly don’t know enough about music to try and win on Ken’s show. You won’t hear me phoning in, but then I already have a t-shirt of my own and I’m never one year out. On the contrary, every year that goes by I’m one year up! 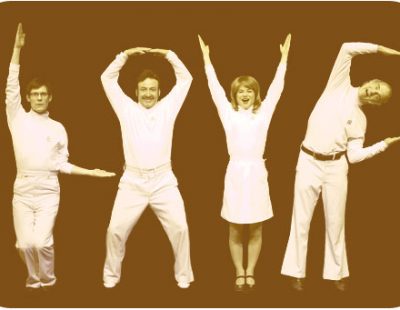