It has been an exciting year for friends of non-alcoholic beer. We’ve seen several new brands appear, and it is becoming more and more common to find low and no alcohol beers in pubs as well. Today, we are pleased to tell you about Fitbeer, another new non-alcoholic beer.

Becky and Joe are the sister and brother team behind Fitbeer. They are based in east London, and we met them at the Club Soda offices a couple of weeks ago to talk about beer, pubs and life as a small start up business. They very kindly gave us some Fitbeer bottles to try too (more of that in a bit!).

Fitbeer is a bit different from most non-alcoholic beers in the way it is made. Usually, a beer is either first brewed to “full strength” and the alcohol then taken out (or “de-alcoholised”), or only brewed to a very low ABV percentage. Fitbeer uses a mix of both methods. It is also made in line with the German beer purity regulations, with only four natural ingredients: malted barley, hops, water and yeast.

The alcohol content of Fitbeer is well below the 0.5% legal definition of “alcohol-free”, between 0.1% – 0.3%. And the calorie content is 66kcal per bottle (330ml), which compares well with “regular beer” which can have around 140 calories per bottle.

And what about the taste? Well, we have good news. Fitbeer tastes just like a good German lager that it is. Crisp, clean, nothing out of place. A “burst of earthy hops followed by a sumptuous malt sweetness, finished with subtle nectar notes” according to Stuart from Dry Drinker. We have offered it at our recent beer tastings, and the verdict has been unanimously positive. We have seen skeptical pub managers faces light up in surprise: “Oh, that’s really nice!”

Indeed it is really nice. Sadly, non-alcoholic beers still have a poor reputation, even with people in the trade like our pub managers, no doubt thanks to the very first brands on the market (thankfully now on their way out as better ones come in). We are working to change those perceptions, and excellent beers like Fitbeer are a great help in that.

Fitbeer launched in October, and is already stocked in a number of east London pubs, bars and restaurants. You can also buy it direct from them, or from Dry Drinker. 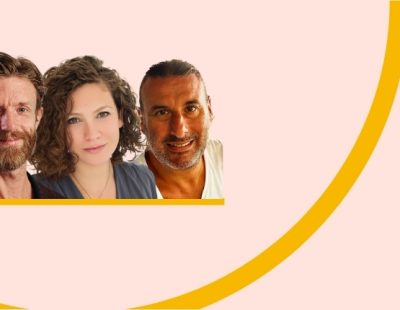 Harriet Waley-Cohen, Ian Young, and Drew Lawson on connection with self

Advice to Our Younger Selves