Moderation after excess: is it possible?

Is it a myth? Or is moderation after excess and a history binge drinking actually possible? Claire explores her personal experience of learning to moderate her drinking.

I never thought I would get here. A few years ago, moderation was a concept that rolled around in my mouth at an uncomfortable angle. And yet… and yet, life is a surprising old thing. We ran a workshop recently at Club Soda, and someone asked how I managed to moderate. I was uncomfortable answering. Mostly, because I really believe that one person’s moderation can be another’s excess, and vice versa. Moderation isn’t always a level plateau either – some days are a bit easier than others.

Getting here wasn’t a streamline process with moderation as the holy grail, and I dare say this is far from the end of the road with my relationship with alcohol. But right now, right here, this is where I’m at. And it feels stable. There are a number of different things that played into getting here.

Firstly, I stopped drinking entirely for a year and a half. I had to go and figure out who the hell I was without alcohol, having drunk from the age of 14 and pretty heavily in response to any situation. I usually describe this period as learning to re-socialise. To move through life’s emotions without trying to numb the crap out of it – happy, sad, grief, love, sex, heartbreak. At 25, I sat and I took them all in, the painful and the oh-so wonderful, probably for the first time in my life. However, at one point, and this point came out of nowhere, for no other reason that I was ready, I had a drink. I’d met a friend, and it was then at the moment I ordered a pint of Guinness. Why a Guinness – because I bloody love the stuff, but I’ve had a few people question why I didn’t reach for something more festive. A few sips in and I was absolutely pissed, and I walked home, sitting with mixed emotions. And I was horribly hungover the next day.

Secondly, I went through a bunch of trials and errors trying to figure out where my limits lay. After that first drink, I skirted alcohol tentatively and then face first. I moved back into a place where I binged heavily with long gaps in between, and the repercussions on me physically and mentally were felt. I have some amazing friends to thank for during that time, who picked me back up when I probably didn’t deserve to be. But slowly, I found a place where my drinking sits comfortably. Sure, at the beginning, I put a number of rules in place, and I thought so much about my drinking and my rules when out, it hardly seemed worth drinking at all. But, I do believe creating new habits is possible (we’re capable of creating bad habits, so why not good ones?), and eventually my rules stopped being at the forefront of my mind and instead naturally blended into who I was. I don’t drink more than two drinks, I don’t mix, I stay out of rounds, and I rarely if ever do shots. It just took some time, some patience and a lot of self love. I also allow myself the occasional blow out – where I know I have drunk too much to do anything productive the next day, and actually enjoy sitting on the sofa with pizza and my partner, my friends and sister, sharing our stories from our night of dancing, watching bad tv. It’s not the same as before, where my nights would end up in a blackout, not knowing how I got home, putting myself at risk. Instead, we dance, I drink water in between drinks, I pace myself, and I go home content. Sometimes, it just feels good to be a twentysomething letting loose.

Alcohol, my relationship with

Allowing myself those occasional blow outs, actually means that all the other times, I care more about my tomorrows. My life has more purpose now. In many ways, I suddenly had to go from 14 to 25, skipping the whole middle bit. And in that process of growing up, I sat and tried to figure out who I was, what I valued, what I wanted, and who I wanted to become. Struggling with alcohol defined me for a while, but now it’s only a small part of who I have become. Alcohol, my relationship with it, will always be something I talk about and want to share. It will always be something I am conscious of. But during the good bits, when life is less about waging war against myself or trying to hold on to life when things shift painfully, suddenly – I’m building myself. So that when shit hits the hypothetical fan, because it will, because it’s life, because things aren’t always easy, my knee jerk reaction won’t be to reach for alcohol, and instead I’ll stand tall, feel it all and know I can move through it.

You can now purchase our first ebook How to go dry this January (and make it stick): Cut down, stop for a bit, quit or stick on Amazon for only £3.99! All the funds from these sales go straight back into making Club Soda better for its growing community.

The original blog was written on Claire’s Rough As page. You can follow her on Twitter as @C_Mali. 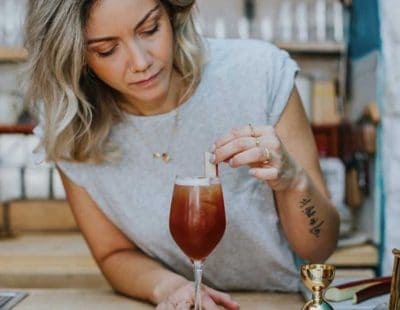 You are a role model … yes you are!