A turning point in changing my drinking

Club Soda went to the theatre last week and it hit a nerve!

One of the turning points for me, in changing my drinking, was something I don’t always admit to. I am afraid it makes me sound too middle class and too London. But I will share it with you today.

Theatre has always been something that energizes me. It was drama at school that gave me my interest in politics. It allowed me to walk in other people’s shoes and see things from another perspective and it gave me the confidence to speak out.

When I gave up front-line politics (I was an elected councillor for 12 years) I enjoyed using my free evenings to reconnect with my love of theatre. But this new freedom also brought with it an identity crisis. I had been proud of doing something that I feel was meaningful for a job – and the role I took up after being elected never filled me with the same sense of purpose. Despite re-engaging with theatre my drinking crept up and up.

I used to feel it was my duty to the arts to buy the overpriced wine at the beginning and interval, to help keep the theatres’ coffers buoyant (how selfless!). So there were times when I would watch a play and not really remember the second half. Then one day with a raging hangover I mused about my teenage-amateur-dramatist self and thought how strange it was that I had not seen Kafka’s Metamorphosis on stage. Berkoff’s adaptation was something I had enjoyed studying (you see why I don’t tell this story!). That morning (ok almost lunch time) I opened TimeOut listing that exact play. A new adaptation at the the Royal Opera House. I had to go.

That night, still with a raging hangover I saw the most amazing piece of theatre in my life. But I also left with a feeling of disgust with myself that I had not been able to engage with it fully. I felt like I had become the beetle in Kafka’s nightmare!

A play about addiction

This is a long way of saying that ‘I am really energised by theatre and, like literature, I think it can be transformative for you as an individual and helpful when exploring personal issues and hangups’. So I recommend that, when it comes back next year, you go and see The National’s People Places and Things which we went to see last weekend as a Club Soda social outing. Not only is it an amazingly acted and produced piece of theatre, but its subject matter, the addiction of a young woman, is powerful and will resonate for anyone trying to kick the booze. For a review of the production you can read this Guardian review. But today I will share what it meant to me to watch it as someone who has already quit drinking.

And it can only be for me. It packed a punch in a few ways:

1.’That could have been me’ – it would not have taken much more for me to be the woman in the play (minus the drugs – but drink alone is enough). The tipping point is always closer than you think, and you may recognise parts of her chaoticness.

2. Like the main character, I am not stupid. There are great scenes in the play where she resists help because ‘she is not like the others there. She see’s herself as clever’. I see so much of myself in this. I would wonder why I could be clever and still able to abuse myself so often. Alcohol doesn’t care if you have a degree. It’s a great leveller (as the stats show) and before we can really truly sober up we have to admit we are like everyone else!

3.  The 12 step methodology is a barrier to change and recovery for many people. This is something I am beginning to explore more and more as we develop Club Soda. Part of the character’s resistance to treatment is that the 12 step ideology (whether couched in religious terms or not) does not make sense to her intellectually and in terms of how she sees herself as an individual.

Our drinking habits are very tied up with our sense of self and we have to begin to unpick that to deal with the problem. The 12 step methodology is in direct contrast to most people’s identity, so it becomes a barrier to individuals seeking help at a time when they need it. It suggests there is only one way, and as logical human beings we know that that can’t be true. I think the protagonist would have been more successful the first time if she had been able to access an approach that suited her values. One size does not fit all and we need, as a society, to develop a greater diversity in service provision, based on what people need rather than dogma. In this play (and this is something I have heard in 12 step meetings) the line ‘there wasn’t anything else’ says it all for me. Why not!

(Note: That is not to say 12 steps is not good for some people. It clearly is, but we are all different and different approaches work better for different people.)

4. Seeing a story and being able to empathise with a character is powerful stuff. Seeing tears run down the face of a person in front of you is something film can never quite manage. Feeling the visceral tension as she faced her demons near the end did not need accompanying music to make it dramatic. The whole audience was feeling it along with her.

So how does my story end? In 2013, after being alcohol-free for almost a year, I was an Olivier judge. I got to see the best theatre off-West End for a whole year. 109 productions later I can tell you I was fully present for them all – the first and second half! Although I did not help each theatre out by buying wine, I do hope that the actors appreciated having my full, undivided attention.

One of my top productions (and a finalist) that year was Fleabag at the Soho Theatre. A solo play where alcohol plays a big part in the story of self-harm! If it comes back on tour again I highly recommend it too.

How to have a sober St Patrick’s Day 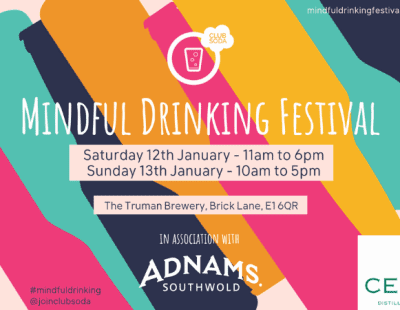