By Laura Willoughby Posted in Distractions

Next in our selection of guest blogs by Club Soda members and continuing on the theme of alternative ways to relax, Sam Chambers describes her recent experience of going sober dancing at a 5Rhythms class. This is great for using dance and music to release negative feelings, as well as a way of meeting new people without drinking.

So, I finally attended a 5Rhythms (5R) class last night after months of thinking about going. For any of you who aren’t sure what 5R is it is a dance based movement practice constructed by Gabrielle Roth. Roth states that 5R is a “dynamic movement practice – a practice of being in your body – that ignites creativity, connection and community”. If I had read that before I went I may have swerved going as sentences like “being in your body” are words that sort of scare me off! I only had a recommendation from a friend as my knowledge and I decided not to read up about it and just go. Often we do too much research into things rather than just try for ourselves (this is a new rule for 2017).

On a practical level with 5R you generally don’t have to book a place and there are no contracts to sign up so you are not tied in; that is appealing to me as you can go to classes when you like and in different areas. This also gives you variety as each class is different in terms of music; however the principles of the movements and rhythms remain the same.

My class was at a college in West London. I was slightly nervous when I turned up as I really didn’t know what to expect apart from that I had to wear comfy clothes and that I would be dancing for two hours.

The dancing would be done in a gym hall with the lights dimmed alongside low glowing lights to give an almost ethereal vibe – very relaxing. I counted approximately fifty people in the hall and at first this was slightly intimidating but we all had enough space between us. I found my space and lay down on the floor essentially copying other people at first. The music was classical and the acoustics in the hall made the music bounce around me.

I lay on my back and stared up at the ceiling just letting the music surround me, then I noticed people getting up and making shapes slowly, some were twirling around, others were doing Bambi leaps around the room and I decided to stand up myself. The music changed to a faster pace – cool Senegalese guitar with a funky afro beat – I felt my body respond but still felt a bit shy! I shuffled from side to side self-consciously; I was utterly cringing inside but was also amazed at how open people were! The atmosphere was so welcoming and free and everyone just seemed to be doing their thing regardless. I realised that no one will care about what I am doing because they are just free in their own world. The music was too tempting for me not to break out my best dance moves so I started to move like I would in a rave! I had my head down at first as I didn’t want to look at anyone! The music then became more techno and tribal and I basically just let myself go! I was head up, doing the running man, swaying from side to side, smiling at people, moving around the room, laughing and genuinely felt like I was at a party but on my own focusing on exercise, which in a way gave myself permission to really go for it.

However, the instructor then said something that chilled me cold: “partner up with someone, copy their movements, embrace their movements, welcome them into your space” and I immediately thought “oh jeeeez, here we go, this is clearly a cult and I am about to be initiated” until all of a sudden a woman about my age danced up to me, smiled and started doing really cool dance moves that I decided to copy! I don’t know what came over me I was being intimate with a stranger and not feeling awkward about it. That spurned me on even more to just let myself go – why not I thought, this is hall full of people dancing like crazy and they don’t seem to give one shit. At one point I though we all looked like the scene out of One Flew Over the Cuckoo’s Nest. I laughed to myself and thought that dancing in itself looks so bizarre and that this was no different to being in a club. The feeling of being so free gave me goosebumps and I started doing really wild moves. I was jumping up and down lightly on my feet, swinging my arms around, bellydancing, shaking my whole body, pumping my fists and I become a shape rather than a human with preconceived ideas and self conscious barriers! I just entered into an almost meditative state of mind.

The music became chaotic and this is when the real madness happened; howling, guttural screaming, groaning, whoops all permeated the air – many of those sounds coming from me! By this time I was sweating and my legs were aching! Two hours of dancing is actually quite strenuous. After a crescendo that reached such a peak I thought my heart would burst and that the gym hall would suddenly collapse in on us, the beat started to slow down. A tune from Simon and Garfunkel, came on and the vibe changed again; people smiled and wiggled their hips past me and I ended up dancing identical moves with a really tall man, laughing as I did so.

Coming towards the end, music full of strings and film score grandiosity filled the room; people started to lie back down on the floor and so I followed suite.

I felt so grateful for the rest and my body was zinging from head to toe. I again rested my head back and looked up to the ceiling so that I could focus and meditate and be present in the moment. Hairs were standing up on my arms as the beautiful music seemed to permeate my entire brain and I suddenly felt a huge ball of sadness in the pit of my stomach. I could actually visualise it; it moved up to my throat and my eyes started to water; I wanted to cry so hard. I couldn’t stop it, I actually started crying; silent tears just leaking out of my face. I held my stomach and tried to breath from my diaphragm to slow my heaving heart down but I continued to let the tears out. I felt that the sadness wasn’t sad but more a recognition of sadness – there is a huge difference because within that kind of sadness there is release and hope. 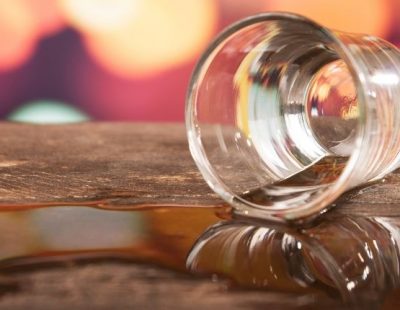 How can I address a drinking problem?

What to drink instead of wine and champagne