Club Soda member Debbie shares with us the important role of music in our drinking behaviour change journey – the sober music power – and has even made us all two playlists to listen to!

Music – happiness but also a trigger?

Music – it’s everywhere in our modern world and for many of us the soundtrack of our lives. It lifts us when we are happy, makes us dance, makes us sing and can even make us cry. And for many of us on the quest for a more sober life it can also be a massive alcohol trigger.

From parties, to pubs and clubs to music festivals the association with having a few is second nature.  We’ve all been there – a couple of drinks and you’re buzzing. The beat is pounding, your head is spinning and you feel invincible so you have another, and another and then you’re not invincible. The next thing you know you’re waking up in the early hours – heart and head still pounding but it’s nothing to do with the music…

Except it doesn’t have to be like that. I’ve come to realise more and more that music in itself is enough – you don’t need to ply yourself with booze to get that wonderful euphoric feeling! It can happen in many ways. It may be, for instance, you are trying to get a bit fitter by walking, running or going to the gym.  Throw a bit of music into the mix and you’ll get the endorphins flowing. The same goes for an exercise class. Back in the 80’s (yes I’m old!) I was hooked on aerobics and loved the mix of exercise and dance music. Recently I’ve just started going to zumba with my teenage daughter and realise how much I’ve missed the buzz that you get from this kind of class.

Of course it’s not just high octane music that can help in the journey to sobriety. I’ve noticed that so many people suffer from stress and anxiety. But rather than self medicating with alcohol, music can be a great stress reliever. I’m a big Spotify fan and if you search there are lots of lovely chill and stress relieving mixes out there. One of my favourites is a selection of free tracks by Moby (who has had problems with both anxiety and alcohol) which are lovely for yoga and meditation too.

Some uplifting mixes just for you

Three years ago I did my first month off the booze by taking part in the Cancer Research Dryathlon, during which I put together a mix tape to help me through the dark, dry winter evenings (along with copious amounts of tea and Cadbury’s pebbles!) It was a mix of old and new tunes – from old funk to modern dance music. This year during my two month AF [alcohol-free] stint (January and February) I discovered Club Soda.

Below you’ll find links to both these mixes – which hopefully you’ll find upbeat and uplifting – whether you are walking, running, cooking, doing the housework or just simply fancy an dance around the house. So what are you waiting for – pour yourself a glass of zero percent and turn the sound up! 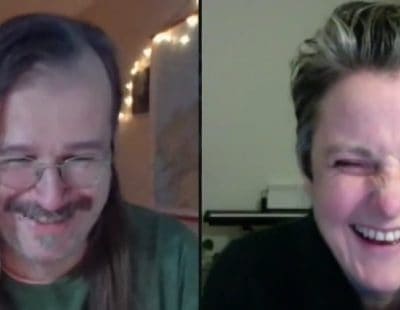