You may have noticed Club Soda’s very first Month Off Booze programme, known to its friends as “The MOB”, happening in October. “Yes I saw it, but what is this MOB thing anyway?” you may well ask. Let me try to explain.

The MOB programme was developed with our expert member Helen O’Connor, who is a health psychologist with lots of experience with alcohol (and smoking and sports and many other topics too). What members who took part in the MOB got was first of all tons of content: daily emails and blog posts on our dedicated MOB website on all the topics that would help them along on their challenge. Helen talked about the psychology of changing your drinking, the various pitfalls and how to prepare and overcome them, and much more. And the Club Soda team added our own tips and tricks, as well as our daily non-alcoholic drink ideas and reviews, all the way from tap water to strange things that hipsters drink in New York.

We also had weekly webinars, to get a bit deeper into some of the MOB topics, and to answer any questions from the mobsters. And if you couldn’t make it to the webinars, they were also recorded so that you could watch them later.

Of course we had a couple of small hitches while we were learning. Like sending out an email on the wrong day (oops!) and doing a webinar while next door someone was doing their washing up and banging plates so hard that we were worried that was the only thing people would hear. But we’ve had some lovely feedback, and also some useful pointers on how to make everything even better in future.

Another new thing we were trying out during the MOB was our “Life Tracker”. Members doing a MOB were asked to track 10 things about their life every week: the quality of their sleep, their moods, energy levels, cravings, and so on. And on how many days in the last week they’d drank any alcohol. This was one of the most interesting things for me, as it gave us lots of fascinating data to analyse. For example, there was a clear connection between drinking and every single life quality factor we looked at: the less members drank, the better they slept, the more energy they had, the better their moods, and so on. It was not a complete surprise of course, but the strength of the numbers was still striking to me. You can see for yourself in the graph below: as the (average) drinking goes down week by week, all the quality of life metrics go up. You can also see the amazing difference a month off booze can make to your life (a more medical look at the same thing was recently in the news).

Once we figure out the technicalities, we will set up the MOB programme online so that anyone can do it on their own, at any time of the year. It won’t quite have all of the things we had in October (like the live webinars), but most of the content will still be there.

So that was the “Go sober for October”. And of course it’s not long now until January. So we are also planning another live MOB with all the bells and whistles for members doing a dry January. 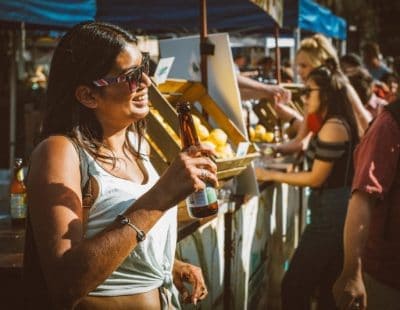 Ditch the Orange Juice – Catering Corporate Events for Everyone

Big ideas for pubs and bars