We have finally met Square Root Soda, who are a new soft drink producer based in Hackney, which is good, because we were beginning to feel like stalkers. We tweet our love for their small batch sodas often!

They make a whole variety of wonderfully tasty drinks, from traditional favourites like ginger beer, lemonade and cola, to three types of tonic water. And they also do a number of seasonal flavours each year: currently in production are rhubarb and cucumber sodas.

We have tasted several of their drinks, and can confirm that they are all delicious. And they contain much less sugar than most soft drinks. You can read more about how they produce their hand-made drinks in this article on their website.

Club Soda met with Ed, one of the two co-founders of Square Root last week. He showed us around their “factory”, and their recently opened “Soda Works”: a cafe and shop that will start opening 7 days a week soon. At the moment they are only open at weekends. You can buy bottles of all their drinks at Soda Works, and also get refills for 1 litre bottles of four of their most popular flavours from a soda tap. Both tasty and good for the environment!

At the moment Square Root Soda’s are mostly available in east London – they still do most of their deliveries by bicycle! But you can also find their sodas in selected cafes, bars and restaurants elsewhere in the UK (delivered by vans, not by bicycles).

Square Root Soda have also just won first prize in the BBC’s Food and Farming awards, drinks category. Let’s hope that the publicity will get these great drinks into more shops and bars across the country! 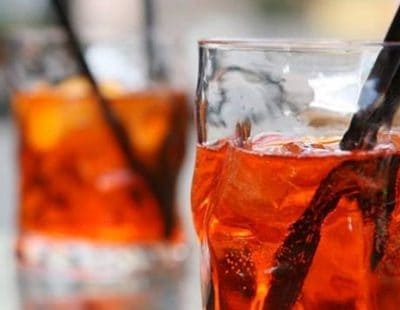 How to Fake an Aperol Spritz