We Need to Talk about Momentum

So, you’ve stopped. Or you’ve cut down. And whatever your reasons for doing so, it’s now been a few months, a few weeks, a few days. With time your initial dry January resolve has ebbed and flowed, the glow of making a change might have worn off and now it’s become very everyday. You might begin to feel that the reasons for having done so are starting to pale and retreat, your mind wandering to all those “good times”. And honestly, this is all starting to seem a bit boring.

But let me stop you there.

Fast Forward to the day after, those days after. That Monday morning where you are sluggish and drained from a heavy weekend, or all that wine with work mates mid-week, or to pushing away those nagging feelings that getting that extra bottle on the way home to drink alone just wasn’t okay. Is that really bringing up all that romanticised nostalgia? When tired, bloated and pallid skin those first thoughts are, “wish I hadn’t had that last one”.

So, today we wanted to touch on momentum. Or, just plain old run of the mill everyday life. Without booze, or with less booze than before. And lots of people do it. Talking to people around you often reveals how many people actually don’t really drink, either at all, or not that much. Further afield, culturally around the world alcohol is not such a crutch for society. Entire communities build themselves away from alcohol. Think tea. Think about never waking up regretful, ashamed, with black holes punched out of your night.

Club Soda member Squiggle wrote of their Month Off Booze in October: “One thing I have found really useful is that one month isn’t that long when compared with the however many months we have on this planet (if we’re lucky). I’m struggling today as it’s Friday, end of the week, and time for a well-earned drink! But then again I deserve also to do myself justice and for once stick to my plan. And in the grand scheme of things it’s not for that long. We’re already half way through too. Hang on in there. I’m banking on feeling very smug at the end of the month and dead pleased with myself. I reckon you will too“.

It’s not easy, for sure. But these are the changes that somewhere along the line you thought, maybe this awkward dance needs to slow down or just stop. Enough. If you’re beating yourself up about not being like everyone else, well, why do you want to be like everyone else? Somewhere along that same line you thought, I’m worth more than feeling this sh*t. That you’ve got more stories in you than, “last night I was so smashed”, shrugging off those nagging feelings of shame. And you are. When you’re starting to feel those moments of boredom, that frustration, that annoyance. Stop and think about the version of yourself that you like. Because they’re probably reading this very email right now. It’s about momentum, but it’s also about just being. 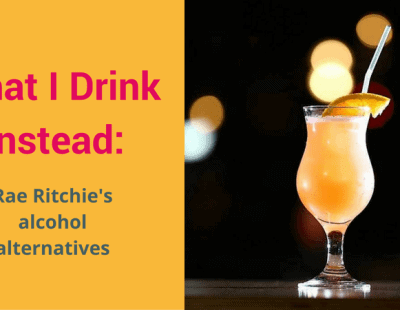 What I Drink Instead: Rae Ritchie’s Alcohol Alternatives