Working behind a bar sober (or trying to be)

Working behind a bar sober

There was something infinitely attractive about working behind a bar. When I was younger, bar staff always carried a whiff of cool. After all, they were the gatekeepers to fun. The gatekeepers to my cool, witty, confidence self. When I turned 23 I got a job working in a concert venue and stayed there on-and-off for the next four years. And I had a really good time. Working a hard shift, where you were serving nonstop, watching the other side getting slowly more pissed, I thought rather smugly, that I was glad to not be them.

But, I’d also been my absolute roughest working there. Coming down, coming up, drinking through, drinking on breaks, free drinks after work. At the end of a shift, I played catch up to the hundreds of people that had just been in the venue. I would rapidly drink 3-4 pints. And then keep going. And it was fun, until it wasn’t, until it was just messy. Drinking got me into a few messes, some involving cops, others involving sleeping around and not quite remembering, not quite knowing when I stopped giving a sh*t if I died, but mostly losing huge chunks of my life to blackouts.

So, I quit. But I kept working behind the bar for another few years. Call it masochism. I stayed on, and I would break all the old habits, and run out of work, dodging the call out for ‘drinks’, and morphed from the good-time-girl to the shy, unsure version of myself when I didn’t have a drink in my hand. Working behind the bar and being able to feel in control in not drinking, was for me, hard but incredibly empowering (Did I mention I was in a day-rehab programme at the time? Yeah. Talk about masochistic).

Not everyone drinks. Not everyone drinks heavily. Statistically, young people are drinking less and less. So, surely, the likelihood of your bartender not being a drinker is a possibility. I asked recently in the Club Soda community of people’s experiences of working behind a bar and quitting or trying to cut back. The responses from two Club Soda members were moving, vulnerable, and honest. Below is a transcript of two interviewee’s. Thank you to them for sharing their views and personal stories. And what about you? What are your experiences of working behind the bar as a drinker or nondrinker?

What is the longest you have stayed sober while working behind a bar?

What’s are the challenges faced as part of your job when serving people alcohol and not drinking/cutting back?

DR: When [I was] working for someone else, it did not bother me serving drinks. It did not make me want one, but when I finished the first thing I wanted was a bottle of wine and I then would get a bottle for home, if not more if we all stayed.  It was like a relaxation/reward for a job well done or hell of an evening, so did not matter how it went that wine was always there at the end.  But when I had my own place, I could drink all the time because the booze was mine.  I used to have people drinking from all hours of the morning from the trade because we had nowhere to go after work!!!!

NW: Obviously being surrounded by alcohol at every turn, but I do not find this a problem.

Do you keep personal mantras in mind when you are serving people to stop you from wanting to drink?

DR: No I am quite disciplined, but after work you have rushed around so much that one glass of wine and finally being able to sit down is the killer.

NW: No I have not needed to do this.

What does it mean to be on the other side of the bar from people drinking?

DR: It makes me very very sad and I want to lecture them so they don’t turn out like me but I kept mine a secret till now but everyone knew especially in my own pub which was full of heavy drinkers.  I can spot an alcoholic a mile away even when shopping.

NW: Its very different ! Gives you a different perspective of events, I was nervous at first but now love it, feel I am in control is a real ego boost.

What goes through your mind when you see someone getting very drunk?

DR: That when drunk people don’t know that they are talking way too loud and repeating themselves over and over again.  Not being able to walk properly but still getting another one down.  Men…..  Some very lonely drinkers on their own. In a group argumentative and talking shit or flirting.  Women emotional wrecks sometimes.  Come in looking lovely and made up dressed to be out and by the end of the evening slurring and looking glassy eyed and not the same women that walked through that door.

NW: Mainly a sense of sadness having been there so many times I feel empathy and sympathy, the women especially get so tearful it is quite hard to witness it. .. bear in mind I work solely at weddings so people do drink to an extreme.

What lessons have you learnt from the other side of the bar?

DR: I have always been at work till recently but I have now resigned because I went in pissed and was sent home.  I had had 2 bottles of wine.  I thought I was fired but I am very good at what I do and the whole crew are piss heads but working sober you can cope but drunk you are just as stupid as the customers and in a busy bar/restaurant it is not as easy as it looks and in fact you are quite a danger if not sober!!!! Again could manage the session but craved a drink as soon as we died down.

NW: At the end of the night when the lights go on there is a terrible soulless feeling amongst those left, usually begging for “one more”, I always drive home thanking whoever that I am sober and no longer in that position. Also when the bar is “free” humans of both sexes and all ages revert to animals it’s frightening to see the sheer amount of alcohol consumed, shocking truly shocking.

Do you find yourself craving a drink or the opposite, pleased to have worked and not drunk?

DR: I have become physically dependent in the last couple of months with tragedies in the family, I have kicked my children out as they were taking the piss but am slowly getting better.  Head wants to stop at 53, I know cutting down will not work.  I am having difficulty to eat but I am going to be a glammy on 20th July or there abouts and I don’t want my daughter to be scared to leave her little Jelly Bean with me.

NW: Absolutely no cravings whatsoever pleased and delighted to not be drinking it’s a real positive for me … the total opposite to being tempted in my case. 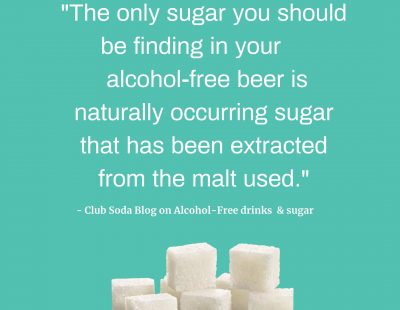 Sugar and calories in alcohol and non-alcoholic drinks.