By Nia Cotton Posted in Feelings and Emotions

Club Soda writer Nia shares her thoughts on the difficult relationship between alcohol and grief having recently lost her Mum.

“Waking up to waves of grief were worse than the hangovers that accompanied them, so I decided to try something different”.

I had always been a party girl since before it was legal for me to drink. A blueprint of a 90s ladette, I boasted about being the first to arrive, the last to leave, the one who danced the most, sang the loudest, and drank all my guy friends under the table. I also knew that this wasn’t the real me. The pantomime dame version of me that went out every night of the week was hiding low self-esteem, body issues, and bad physical and mental health under layer upon layer of mascara. As time went on and my friends all started to move away or get sensible jobs, it became obvious to those who knew me that all was not as sparkly as it seemed.

And then the day came when I was forced to sober up: I found myself sitting on my bathroom floor, staring at the pregnancy test my friend had given me as a joke, looking at two blue lines through tear-stained eyes.  It must have been a false positive, I told myself as I took myself off to the doctors.  With all the medications for my Crohns Disease and side effects from bowel surgery coupled with downing cider to deal with the pain and then enduring wicked hangovers, neither I nor my doctors had realised that I was, in fact, 6 months pregnant.

I didn’t tell my parents; I knew they’d be disappointed. My on/off party boyfriend promptly disappeared, and so I went to the scan alone. As I listened to the heartbeat, the sonographer said “So, this is the first time you’ve seen your daughter, huh?”

It was also the last. Two weeks later, I woke up in immense pain. I’d suffered a miscarriage and had to have an operation. The doctors discovered that, due to internal problems, I was unlikely to ever be able to carry a child safely.

Alone and distraught, I shut myself away from everyone, ashamed of the mess I’d made, feeling guilty for not being more responsible, and unable to express the gut-wrenching pain I felt. I literally drowned it out; I’d never really drunk at home before, but a dangerous concoction of alcohol and grief consumed me. I found myself day drinking until I passed out – it was the only way I could sleep.

If it weren’t for good friends, I’d still be passed out in a flat on my own. I just couldn’t see a way out of the loss and guilt.

One day, my front door flew open and my friend made his way through the messy house and peeled me off the sofa. He shouted at me, hugged me, and pleaded with me until I got washed and dressed and agreed to go to the doctor. “This is not how we deal with this” he kept saying. It became my mantra, something to hold on to every time I craved the oblivion of drink. I knew he was right – the waves of grief I woke up to every day were testament to the fact that self-medicating and binge drinking weren’t effectively erasing my pain. If anything, my cocktail of alcohol and grief was intensifying all the negativity and it took a pissed off friend to pull me kicking and screaming out of my depression.

I signed up for an alcohol day treatment plan. At first, I was skeptical; surely this was just a lecture about addiction that would just make me feel worse about my abuse of alcohol and grief coping mechanisms? It turned out to be exactly the opposite and, to my surprise, exactly what I needed.

Much like the online courses that Club Soda offer, I enrolled in a 12-week program which encouraged me to explore the feelings, emotions, and behaviours that had led me to problem drinking. It was like the floodgates had opened. I didn’t just give up drinking during that course – as ‘woo-woo’ as it sounds, I found myself. Under all of those layers of cider and mascara and attitude was someone who hadn’t been prepared to grieve the life I hadn’t let myself admit I wanted the most – my own family. It opened me up to understanding the emotional reasons for my addictive behaviour.

What I learned when I gave up drinking was that alcohol and grief don’t mix well – the only way to heal and move on in life is to experience everything, good and bad, and express how that makes us feel.

7 years later, and my life is completely different. Both experiences – that of losing my daughter and finding myself underneath the pile of cider cans – have fundamentally changed me. I’m now in a loving, long-term relationship where I feel I can be open and being heard, and I followed my dream of being a writer and immersed myself in the sobriety world, determined to shape myself into someone my daughter would have been proud of.

It was while booking the venue for our wedding 8 months ago that my Dad called to say my Mum was acting a bit out of sorts. She’d had a mini-stroke. The scans revealed things that we could never have imagined: stage 4 colon cancer and two malignant brain tumours. My Mum, at 62 years old, survived 9 weeks before cancer took her as the first wave of the pandemic hit the UK.

This time, the devastation was different. Lockdown meant that I was alone again in my grief, but this time I knew: “This is not how we deal with this”. Alcohol would have numbed the pain temporarily, sure, but it would also have elongated it, exacerbated it, and made healing from it almost impossible. This time, I knew to express myself to my partner, talk to friends, be honest about the fact that this was bloody painful and that I might need some help/food/tissues/a scream at the sea. After all, grief is an expression of love lost, and not to feel it, understand it and express it would feel disrespectful to my Mum.

Instead of oblivion, I decided to create a reason to face my grief and to help others express theirs, too. I started a small Facebook Group called Griefly, and am hoping, when the pandemic is over, to set up safe spaces for people to meet, have a coffee, and to feel that they can express their grief amongst people who understand. I’m eager to convey how important it is that we talk communally about major emotional issues such as death and not have to turn to alcohol when we find that our current society doesn’t always allow us to normalise expressing feelings that we’ll all have to face one day.  For me, expression is freedom and the opposite of the oblivion we often turn to is openness.

If you need a safe space in which to talk about grief and loss, Griefly is a private supportive Facebook community who welcome anyone in need of an understanding ear during a time of loss. 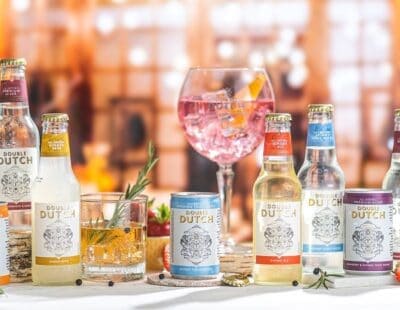 What mixer should I use with my alcohol-free spirit?