Gluten is a protein found in barley, wheat, and rye. Many people also react to a similar protein called avenin, which is found in oats.

This differs from gluten intolerance, which can cause short term discomforts such as bloating and stomach pain, but does not cause long term damage to the body. Both are reasons for avoiding gluten, but those suffering with coeliac disease must be more vigilant.

To be considered Gluten Free a product must contain fewer than 20ppm (parts per million) of gluten. While many coeliacs are satisfied with this, some people will prefer to avoid gluten completely. The easiest way to do this can be to avoid all products containing wheat, rye, or barley. And remember that some gluten-free products may be made in a facility where gluten is present. It is important to note that there are not strict requirements for producers to test the gluten levels in their products in the UK, but if you are in doubt you should contact the producer directly and ask them to clarify the steps they take to ensure their product can be listed as gluten-free. I contacted a few when writing this article and they were all very happy to respond.

For the most part, ciders, wines, sodas, kombuchas, and clear spirits are Gluten Free. It’s always worth double checking, but as a general rule you should be fine with these products.

Gluten free alcohol-free beers can be harder to find, but there are plenty available in a variety of styles if you know where to look. Here are a few of our favourites.

Drop Bear brew an exceptional range of gluten free alcohol-free beer, and it’s even vegan as well. Their most recent release is the Bonfire Stout, a full-bodied smoky dark beer. They also make a Yuzu Pale ale, with bright citrus qualities, and a Tropical IPA bursting with stone fruit and passion fruit flavour.

Several of Big Drops beers are gluten-free. They brew a selection of styles, from lager to stout.

Gluten-free favourites of ours include their Paradiso Citra IPA – bright citrus with a moderate bitterness, and their Pine Trail pale ale, which showcases a pleasant balance of floral and citrus notes. (At the time of writing, all of their beers come in below 10PPM, except for their Brown Ale, which is not currently gluten free).

Something a bit different…

Binary Botanicals is a unique product that sits somewhere between a beer and a sparkling wine. It makes use of hop leaves and wine yeast, and is reminiscent of prosecco. It has some soft tropical notes, and a crisp clean finish. This is a nice one to pour with dinner, or to cheers with on a special occasion.

There is plenty of variety to be had when it comes to alcohol-free and gluten free beer. Nirvana have brewed Kosmic Stout, a fantastic smooth-drinking stout with hints of chocolate and vanilla. Great for pairing with deserts, or even adding to cooking, think stews or chocolate cake.

Jump/Ship Yardarm is a crisp lager with a citrus hop character and a mildly bitter finish. This has a really full flavour, boasting a biscuity malt base and a bright citrus zest from the hops.

Heineken 0.0 comes in under the 20ppm threshold for gluten, and is therefore considered gluten-free by the celiac society despite containing a trace amount of gluten. This is a crisp, easy drinking lager, perfect for sunny afternoons in the garden.

Estrella’s Free Damm pours a clear pale amber, and layers delicate floral notes over a solid malt backbone. It has a smooth mouthfeel and is easy drinking.

Ambar was one of the first gluten free alcohol-free beers to be available. It has a slightly sweet and roasty amber malt base, with hints of delicate spice and lively carbonation.

Minus is a pale ale from Norwegian brewery Ægir Bryggeri. It boasts a soft mouthfeel and delicate, refreshing grassy and citrus notes. Best served alongside light dishes when pairing with food.

Some brands featured in this article are members of Club Soda, and we work a little more closely with these. You’ll always find a couple of them in our reviews but we remain completely impartial. 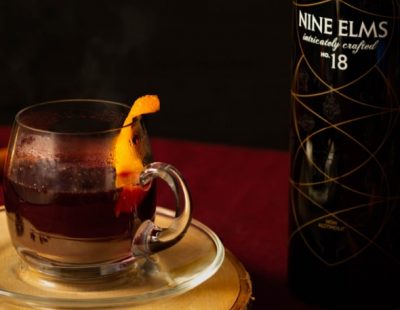 Taste Christmas with a mulled wine recipe from Nine Elms