Mindful drinking is here to stay. No longer a trend for the new year or just #SoberOctober, people are taking a more considered view to drinking alcohol and it’s having a direct impact on their mental wealth.

In this video, Ruth Cooper-Dickson, a Positive Psychology Practitioner and Managing Director of Champs, sits down in conversation with Tori Felder (AKA The Retired Party Girl), military veteran David Cooper, and GP and broadcaster Dr Radha Modgil to discuss their mental wealth experiences.

Often you actually have to ask a very direct question …. do you ever use alcohol as a coping strategy?

I think that’s really interesting because obviously the last five, six years, we’ve tried to get better at talking about mental health, which is fantastic, but I think with alcohol and how we drink there’s so many more layers, stigma and shame.”

“I started going to cognitive behavioural therapy when I was 21. I didn’t stop drinking until I was 25. And there were so many times where my therapist tried to link my mental health issues to my drinking behaviours. And I just wasn’t willing to see that link.

And I think a lot of that shame comes from just the way it is in the media. And then in my age group, specifically being 21 is the age you can drink in America. And so it’s normal to get blacked out on your 21st birthday.”

David Cooper – drinking in the military

“Certainly being sort of a male and in that military environment, they’re two very sort of dominating groups. And when you put them together, they’re even sort of more powerful.

The military sort of drinking culture was very excessive and it was kind of frowned upon if you weren’t going to drink. It is the way you decompressed a lot of those emotions and scenarios that you had gone through … through drinking.”

“A lot of wellness spaces are whitewashed and I am a person of colour. So I didn’t see any representation as far as my race and my age. I went on Instagram and found sober communities, it was like the heavens opened up, the clouds opened up and sun was down.

“When you don’t feel so alone and you feel like you’re not the only one, then that shame reduces … you can then start being more empowered and actually stepping into your power to be who you want to be and live your life, how you want to live it.

Everyone needs to be more emotionally aware of what’s happening in our bodies and our minds, how we feeling. And if we’re feeling a certain way, we can recognise what actions we then take to help ourselves feel better.

I think that awareness or emotional space is really the key to unlocking the changes that we want to make in our lives in lots of different areas”.

“… he was telling me these great stories about how the got more time and energy and vitality. And they’ve got that sparkling umph back …. it blew me away a little bit. I came home, told my wife that I was gonna take a break from drinking. And she looked at me like I’d gone mad.

Listening to experiences of people that were going through that journey … it was also quite reassuring to know that all these routines and triggers were normal. And I kind of gave me that reassurance that it wasn’t a bad thing.”

Tori Felder – joy from getting sober

“I feel like when I got sober, I started to tap into that child, like joyus things, like going out for ice cream, which would be like, you like this giddiness and this joy. And my new thing has been buying dresses, which I probably shouldn’t do, but I love like twirling around in a pretty little dress and going out to dinner.”

Ruth Cooper-Dickson – what is mental wealth?

“We have to be very careful about language as well. ‘I failed/lapsed. I let myself down, I can’t do it’. You know, those things. If we say those words too much and use that language too much, we start to believe it. And then that feeds into that sense of shame. And that’s more likely to then trigger those unhelpful behaviours to continue.

Use kind language yourself and sit there and think to myself, ‘you know, I’m not perfect. None of us is perfect’.

When you do have a little step back, that will make the actually helps you remember and remind yourself even more of why you wanted to do it in the first place. So go back to your why and look at that little lapse. Call it a reminder, a really good reminder, as a strengthener for your resolve to move forward.

“Being honest with yourself and those that close around you, because you’re going to need some support. So everybody understands and knows what you’re going through.” 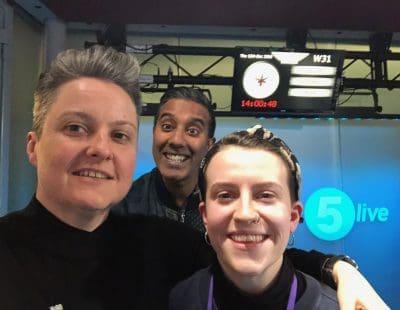