Don’s career in the wine trade was born out of his earliest experiences working in restaurants.

“I grew up in restaurants,” he says. “My brother and I both worked in the only Good Food Guide seafood restaurant in Leicester when we were growing up. My brother started working at a young age, around 15 years old, and I’m four years younger than him. So I was super young whilst running around in these restaurants. I really always loved the buzz of the environment. And somehow, from a distance, I saw that everyone was fascinated with wine, almost more so than the food. It’s such a big part of the occasion, and it seemed to facilitate all of these incredible moments of togetherness. So I felt an early connection with wine, way before even coming to drink it.”

An early start in a professional kitchen made for a natural progression into hospitality. Don managed bars and restaurants and found that hospitality experience made travelling possible. He ended up in Canada, working in a wine store. “I tasted thousands of wines. I love the environment and wondered what else the wine trade had to offer.”

Moving back to New Zealand, Don enrolled in a viticulture degree course. “It was an awesome experience. There are all these people that were totally fascinated and obsessed with wine, microbiology, soil science, and everything that goes around wine. Way beyond just the end product.” Don loved the teamwork and the year-round cycle of wine production. But on his way to a new job in Chile, a two-week stopover in London turned into a permanent stay, then a relationship, kids and a permanent role working in London’s wine trade.

I tasted thousands of wines. I love the environment and wondered what else the wine trade had to offer.

Drinking in the wine trade

Drinking culture impacts every industry and trade, from teaching to banking. But when your work centres on alcohol, expectations of professional drinking can have a personal impact. Finding the line between professional and personal consumption of alcohol can be a challenge for many in the drinks industry. And Don has seen the impact first-hand.

“Where is that line? I don’t know,” Don reflects. “I know some people who navigate it extraordinarily well, and I have all kinds of respect for them.” But heavy drinking was commonplace in Don’s professional circles, especially in the mid-10s before the widespread emergence of low and no options.

“The culture in the industry was massively around drinking. The wine trade typically says if you’re out for lunch, that’s it. There are no meetings, nothing else scheduled for that evening. There’s nothing actually scheduled up until about 11am the next day. You finish a tasting, then go for a few beers to freshen your palate, then take people out for dinner. It doesn’t stop.”

It doesn’t stop. I was working all the time, and I just got tired. I stopped drinking entirely. But I felt like an outsider.

Eventually, this culture of drinking took its toll. “I was working all the time, and I just got tired. Literally, it was too much to handle. So I stopped drinking entirely and cut it out completely to see what would happen. Taking alcohol out of the equation did make life a little bit easier in some ways, but I felt like an outsider. Low and no alcohol options weren’t really the thing back then, so the alternative to wine was to have soda water or a cup of tea.”

Despite taking a break from drinking, Don held on in the wine trade for a while. But eventually decided to step away. That’s when he discovered alcohol-free alternatives.

Alcohol-free options that focus on flavour

Flavour runs in Don’s family. His grandfather was a flavour scientist, working in the team that formulated products from clear Coca-Cola to raspberry candies. For Don, his fascination with flavour is part of what kept him in the wine trade. “There’s this alchemy of taking a natural product and then stewarding it through the winery. It’s fascinating to observe. You give ten people the same starting point, and they end up with ten different wines, with something of your personality and craft in each and every glass.”

So flavour was always paramount in Don’s journey into alcohol-free alternatives. “I started tasting everything”, he says. “It was a mixed bag, but there were so many excellent options. Like fresh, zesty and satisfying mojitos made with Caleño Dark & Spicy. I actually worked in a Cuban bar for a while pumping out mojitos all day, every day: lime, mint leaves, sugar muddled together, and crushed ice piled up on top with a massive sprig of mint. The alcohol is a very small part of that because there’s so much else going on. So you can actually have the alcoholic version and non-alcoholic versions side-by-side, and they are very, very similar.”

Any other alcohol-free favourites? “A Hoppy Pale Ale from Nirvana, a Galactic Milk Stout from Big Drop, a Tanqueray Zero G&T with Fever-Tree angostura infused tonic. My wife sort of jokingly said that I was becoming a non-alcoholic because I was smashing through all these different drinks. But it’s not an exaggeration to say that I had 20 drinks a day for 20 years, so just drinking water and coffee was not going to happen. From working in the wine trade, my palate was just so accustomed to the constant kind of excitement from various flavours.”

Don’s go-to alcohol-free options took him out of the wine category to explore new flavours, but what’s his experience of alcohol-free wine itself? “The development has been slower, but it is happening,” he says. “People are starting to be open to tasting delicious dealcoholised wine. I was talking recently to one of London’s top sommeliers, and he said how good the wines from Odd Bird are. And from someone like him, this is massive. He would never put his name behind anything that he didn’t genuinely believe to be good. And I love the phenomenal Bibo Runge Deserteur Riesling from the Rheingau and the exceptional Ama Pét-Nat tea from the Basque Country. The list is long and growing by the day.

“These drinks make it possible to enjoy all the same occasions, connections and togetherness we’ve enjoyed in the past without ingesting alcohol.”

How is the wine trade changing?

“There are now many venues that have a serious and considered low and no offering. The Clove Club in Shoreditch do a fantastic job, Hakkasan has led the way internationally, and the Launderette in Manchester do stellar work. From fine dining through to neighbourhood pubs, we’re seeing the category being embraced by consumers and operators alike. That said, there is still work to do. Many venues still have an underwhelming, uninspiring selection. These venues are missing out on revenue, and their customers are being denied an enjoyable and positive experience.”

Don’s confident that the low and no market can only get better by focusing on flavour and providing grown-up alternatives. “Gen Z is drinking less than previous generations, and many in older generations are drinking less too. Whether dialling down our drinking or stopping completely, these alternatives are delicious and enjoyable options for all. The market is testament to this. It’s exciting to watch the category grow.”

The low and no category creates value in people’s lives. These products can help to improve mental health and wellbeing, and facilitate great times spent together.

He’s also ambitious about carving out a role that encompasses alcohol-free drinks and the world of wine. “Personally and professionally, my goal is to become a trusted category expert who can guide and encourage operators to provide the best possible low and no options for their establishment. I want to be a trusted guide for the consumer who is looking to dial down or stop drinking entirely. This excites me beyond just flavour, enjoyment and business because the low and no category creates value in people’s lives. These products can help to improve mental health and wellbeing, and facilitate great times spent together.”

And what about his personal drinking habits now? “When I initially thought about stopping drinking, what I wasn’t prepared to give up was sharing a beautiful plate of food and a glass of wine with my wife, nights out with friends punctuated with cocktails, beers with the guys putting the world to rights. Drinks and drinking have been such a central part of my life that giving up entirely would be very difficult.

“But let’s face it. Alcohol isn’t a great drug. I don’t think we ever really wanted to be under the heavy influence of alcohol. We actually just want to enjoy spending time together in relaxed, social settings with something delicious, refreshing and grown-up in hand. Culturally this has become synonymous with drinking alcohol, but the low and no category is changing that. Here’s to more mindful drinking.”

If you work professionally with alcohol, in the wine trade or elsewhere, Club Soda can support you in reevaluating your relationship with alcohol. With backing from The Drinks Trust, Club Soda’s in-depth courses are available free of charge for anyone who works in any part of the UK drinks industry, from production to hospitality. Learn How to Stop Drinking if you are taking a break from alcohol or How to Drink Mindfully to discover some balance in your relationship with alcohol. Once signed up, you can progress through the courses at your own pace. You’ll also find opportunities to connect with others in the industry and beyond who are changing their drinking. Start today.

Don’s name in this article is a pseudonym. 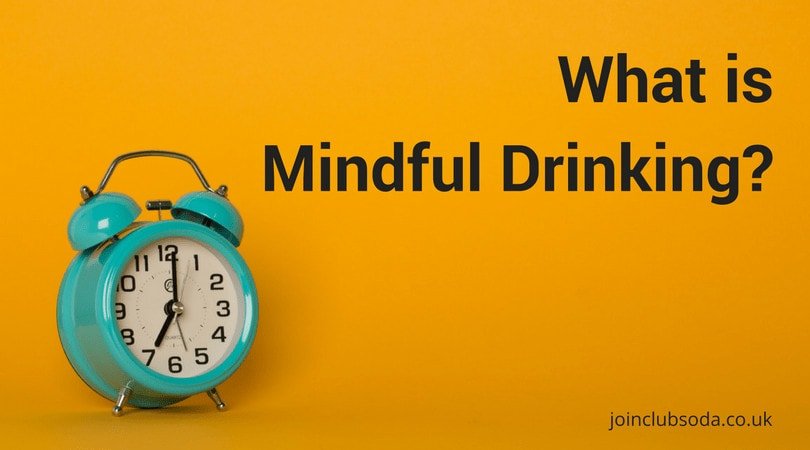 What is mindful drinking? The 7 Habits